Cory Gallant & The Red Dirt Posse @ Country in the Park 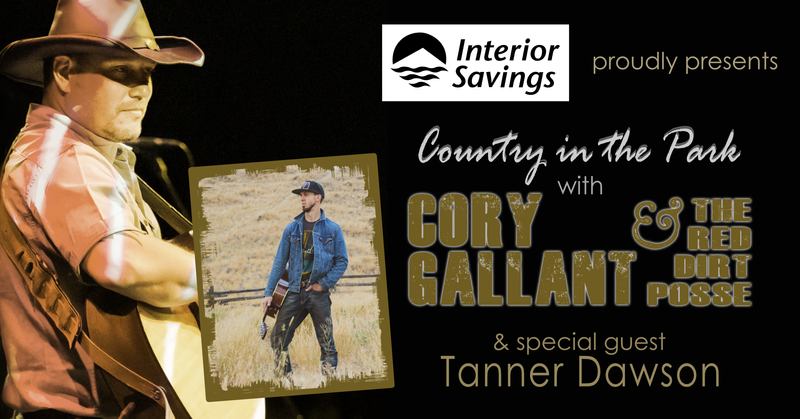 Sponsored by Interior Savings with proceeds to the Lytton Fire Dept.

All you need to bring are your dancing boots and a chair for when you need a rest.

If you can't attend, donations will still be appreciated. Details posted soon on how to donate.

Cory Gallant is determined to make every night feel like Saturday night with the summer release of his third radio single, “Daddy Was Saturday Night” (written by Ken Flaherty and Tyler Whelan, produced by Jason Barry). This rockin’ country tune will be a surefire way to celebrate summer and get everyone out on the dance floor.

Tanner Dawson is a country music artist born and raised in small town Chase, BC, Canada.

Tanner has recently released his debut single "The Man You Make Me" and is working on his debut EP to be released mid-2022.

In short, Tanner is the definition of a hard-working, blue collar boy, striving to bring his working class grit to the country music scene. Tanner's traditional country vocal mixed with his influence of rock, blues, funk, and 90's country create a very unique and broad sound that he hopes to showcase in his subsequent releases. He emphasizes these different influences drastically with his live shows, which prove to be high energy, emotional and engaging, giving fans "a little something for everyone".